We can therefore conclude that, in the presence of significant LV dysfunction and predominantly central sleep apnoea, ASV may become a harmful intervention. People with enlarged and weakened left ventricles are a particularly vulnerable group, some of whom may also be at risk of sudden cardiac death from co-existing arrhythmias. In current clinical practice this has led to the increasing use of implantable defibrillators (ICDs).

Primary endpoint was reached in April 2015.

Adjustment of ASV was performed in the hospital using polysomnographic or polygraphic monitoring. Default settings were used (expiratory positive airway pressure, 5 cm of water; minimum pressure support, 3 cm of water; and maximum pressure support, 10 cm of water). The expiratory positive airway pressure was increased manually to control obstructive sleep apnoea (OSA), and the maximum pressure support was increased to control CSA. A full face mask was recommended for the initiation of ASV. Patients were advised to use the ASV device for at least 5 hours per night, 7 days per week. Adherence to therapy was defined as ASV use for an average of at least 3 hours per night.

Clinic visits took place at study entry, after 2 weeks, at 3 and 12 months, and every 12 months thereafter until the end of the study. Patients in the ASV group also underwent polygraphy or polysomnography at each visit and ASV device data were downloaded.

312 of the patients involved in SERVE-HF were also enrolled in the major sub-study, that was aiming to assess changes in LVEF as measured by echocardiography from baseline to 12 months as its primary endpoint. It was also designed to examine changes in ventricular function and remodelling, biomarkers (such as brain natriuretic peptide), disease specific quality of life, cognitive function, anxiety and depression, and sleep and respiratory parameters.

The SERVE-HF intention-to-treat analysis showed that ASV had no effect on the primary endpoint: composite of death from any cause, lifesaving cardiovascular intervention, or unplanned hospitalisation for heart failure (HF).1

However, both all-cause and cardiovascular mortality occurred significantly more often in the ASV group.1 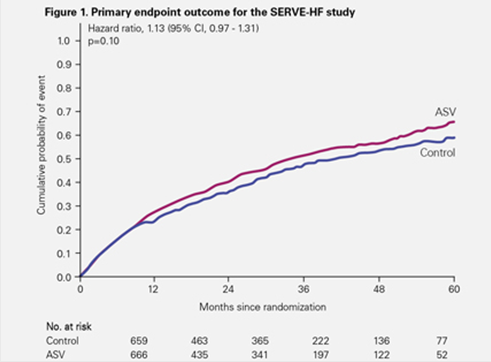 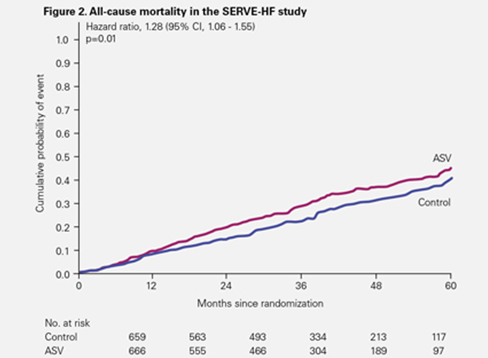 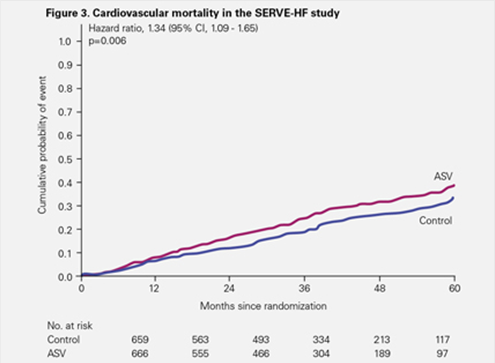 Following additional robust statistical analyses, it is now possible to discount any suspicions that potentially confounding factors – like low patient compliance with ASV or high cross-over between comparator arms – may have accounted for or substantially contributed to the observed mortality risk.2 The different on-treatment analysis confirmed that there was no impact of cross-over or compliance on the mortality risk in SERVE-HF.

A robust statistical methodology called multivariate and multi-state modelling has been applied to SERVE-HF.3 The main findings are that:

As a result, we can confirm that the observed mortality risk occurs in patients with LVEF ≤45% and that the harmful effects of ASV correlate with pre-existing LV systolic impairment.

ASV may not worsen LV function3

The major SERVE-HF sub-study showed that ASV may have no effect on left ventricular function or remodelling and does not affect systemic markers associated with the heart failure syndrome, such as circulating neuro-hormones.

There was also no meaningful increase in hospitalisation due to worsening heart failure in the study.4 Therefore the possibility that the mortality risk might be attributable to deterioration in LV function appears remote. 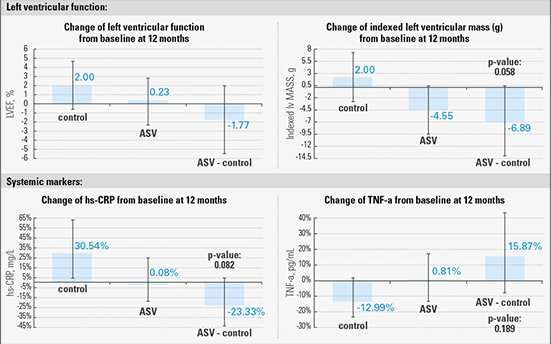 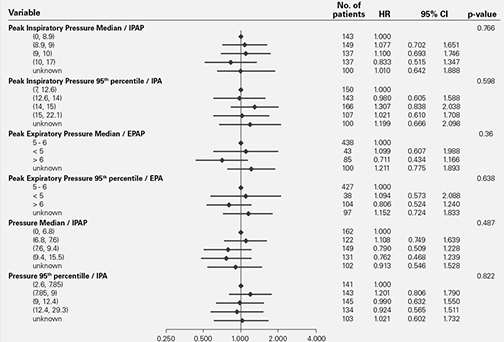 We can therefore conclude that, in the presence of significant LV dysfunction and predominantly central sleep apnoea, ASV may become a harmful intervention. People with enlarged and weakened left ventricles are a particularly vulnerable group, some of whom may also be at risk of sudden cardiac death from co-existing arrhythmias. In current clinical practice this has led to the increasing use of implantable defibrillators (ICDs).

Patients with LVEF>45% continue to be eligible for ASV

Experts’ statements agree that patients with LVEF>45% remain eligible for ASV when there is a clinical rationale for using it.7,8,9,10 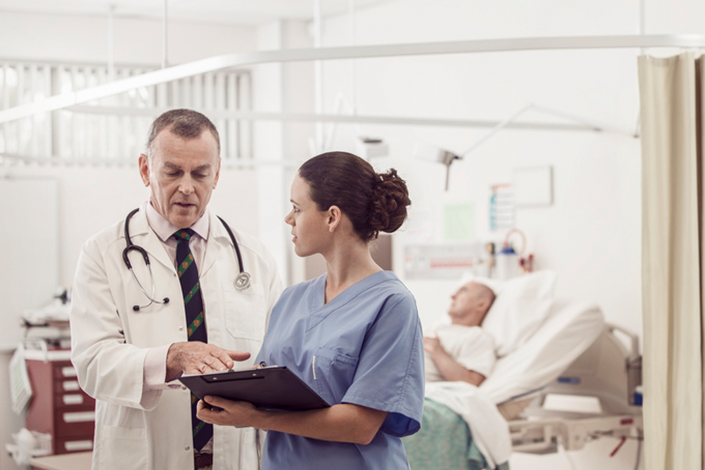 Reduced LVEF should be excluded before using ASV9

SERVE-HF identified a specific at-risk patient population. The harmful effects of ASV correlate with pre-existing LV systolic impairment and the mortality risk is in patients with LVEF<45%. ASV therapy is contraindicated in patients with chronic, symptomatic heart failure with reduced left ventricular ejection fraction (LVEF≤45%) and moderate to severe predominant central sleep apnoea. Reduced LVEF should be excluded before using ASV.9 It is therefore important to ensure that LVEF is >45% and echocardiography is recommended for this purpose.

Some patients – especially if referred by a cardiologist – may already have undergone echocardiography so it is worthwhile checking their medical notes. If not, a cardiology referral may be worth considering, as a high proportion of patients with SDB have some form of underlying cardiac disease.

Patients with LVEF>45% continue to be eligible for ASV

The mortality risk observed in SERVE-HF was seen in a high-risk group of patients with systolic heart failure and predominantly central sleep apnoea. This group is not representative of all patients who may be eligible for ASV therapy.

Informed by these findings, experts7,9,10,12 in the field agree that patients with LVEF≥45% remain eligible for ASV whenever there is a clinical rationale for using it.

Since May 2015, the French and German healthcare authorities have agreed to limit the contra-indication to heart failure with reduced EF ≤45%.13

Experts’ statements confirm that ASV is eligible in these different situations:7,9,10,12

It was essential to [ensure] that these results, obtained in a very precise and very fragile population which is not representative of the majority of current indications of ASV, [would not be extrapolated to] pathologies with different mechanisms and for which the use of ASV remains fully effective. This is of course the case of the treatment of central sleep apnoea secondary to stroke or related to a complex sleep apnoea syndrome for example. However, this is also the case of heart failure with preserved ejection fraction.

It should be stressed that all statements relate exclusively to patients with heart failure New York Heart Association Functional Classification II-IV (NYHA II-IV) and an ejection fraction ≤45%. That is that the therapy can be continued unchanged in patients:

Adaptive servo-ventilation (ASV) targeted to normalise the apnoea-hypopnea index (AHI) can be used for the treatment of CSAS related to CHF in adults with an ejection fraction >45% or mild CHF-related CSAS. 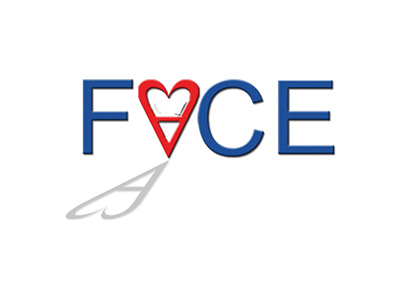 The FACE study will provide long-term data on morbidity and mortality of heart failure (both HFrEF and HFpEF) patients using ASV.

END_OF_DOCUMENT_TOKEN_TO_BE_REPLACED 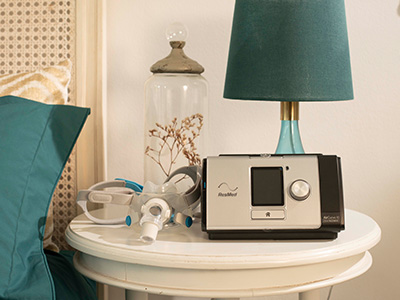 It can be challenging to treat patients with central sleep apnoea. Learn more about CSA treatment options.