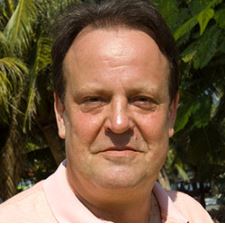 Bob Benton 56 is single and lives in Fenchurch Street in London. A publican by profession, Bob was diagnosed with obstructive sleep apnoea in 2012 following treatment for cardiomyopathy, a heart muscle disease that is often hereditary.

Having shown symptoms of sleep apnoea, Bob was sent to Harley Street for a sleep test, following which he was diagnosed with severe sleep apnoea with pauses in breathing of more than 43 each hour!

t was recommended that he use a CPAP machine. Having done some research into CPAP and the best devices available, Bob visited ResMed’s London clinic in Wimpole Street and discovered the S9, his favored device at the time. He also spent time trying out different masks in order to find one that suited him best, finally settling on a nasal pillows mask.

In June 2014 Bob was approached by the London Clinic to ask if he would take part in a trial for a new device. His enjoyment of researching CPAP equipment made him a perfect candidate and he agreed at once.

Talking of the AirSense 10 AutoSet Bob comments, “The reporting is a great aspect of the new model. What’s more this reporting has demonstrated that my apnoeas are down to less than five a night! Also I’m sleeping for longer and usually get a good 5-6 hours sleep without waking at all which has made me feel much more alert during the day and has given me a sense of feeling really refreshed when I wake up.”

The new device is also much quieter, “I don’t know that it’s on”. Bob also feels that it is much lighter so that while the size is not dramatically changed, he imagines that the reduced weight will make it easier to travel with the new model.

Bob also believes the ramp functions which adjust the pressure comfort levels are easier to control. He says, “The functions are very simple to use and therefore give patients the opportunity to experiment and to find out what works best for them – everyone is different and this new facility recognises that and allows each individual to find the correct pressure for them.”

He adds, “I have found that the humidifier requires a lower temperature to my old machine. I have turned it down by two degrees which means that it consumes less water and if I had a particularly long sleep, the water is unlikely to run out.”

Finally his advice to new patients, or those considering a new machine is that “I would suggest that other patients upgrade to AirSense 10 AutoSet as soon as they are able to.”