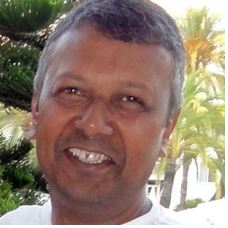 Ashim 49 lives with his wife in Barlestone, near Nuneaton in Warwickshire where he is an electrical design engineer. He was diagnosed with obstructive sleep apnoea nearly two years ago.

When ResMed approached Ashim in June 2014 to trial the new AirSense 10 Autoset device, he was keen to take part. The benefits of the new machine were evident almost immediately. With his ResMed S9 device Ashim had seen an improvement on the number of hours sleep he was getting compared with pre-treatment but upon switching to the new machine this improvement increased again.

He says, “The new machine made a huge difference. I can’t stress enough how brilliant it is. The first thing I noticed was how quiet it is. Previously I would lie awake for a while but now I drop off within 10-15 minutes and the machine senses when I’m asleep – the air flow is very gentle until it senses that I’m asleep and only then does the pressure increase.”

An added benefit is that Ashim’s wife used to wake up if the air leaked or when Ashim was restless but now she finds that she also sleeps through the night. The couple would not swap it for any other unit – Ashim compared it with driving a Ford Fiesta and then moving into a Jaguar! It means that they live a more normal life and their quality of life has improved considerably.

In addition the tubing is much more flexible and allows for greater movement during the night. This, together with the quietness of the machine, makes it easier to use.

The device is also very portable. On a recent holiday to Majorca, Ashim took the new unit on the flight and had no problems during the journey, using it throughout his time away. The wireless connection also worked well while they were away and indeed has been a feature that Ashim has found very useful. It has meant that if he has any concerns he can get them resolved very quickly by asking ResMed to monitor his activity. This gives considerable reassurance and also provides a sense of being looked after.

I did find that the bag was a little small for my existing mask which makes it bulky when travelling but this is a minor issue which I’m sure will be rectified.

Ashim concludes, “I would say that the device is 75% better than the previous model. You expect progress to show improvements but I feel that the AirSense 10 AutoSet is a tremendous step up, and I’m sure my wife would agree! Having used it for six weeks, I would not swap it for another unit.”

“If someone has been recently diagnosed and is looking at the models available to them, I would urge them to consider the new device. I’m sure that it will be more expensive than the previous model but as far as I’m concerned it is worth every penny, and the investment in a good night’s sleep is priceless!”